Articles
You are here: Home / Articles / New Article / Optical sensor for the detection of arrhythmias 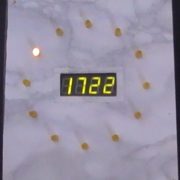 Chip resistant to all Italians radiation