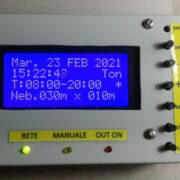 After my sabbatical due to an epidemic with related complications and various griefs, I return to publishing It is well known that if you have to go to the United States

BINARY_COLOR_CLOCK (and other watches)
0 replies